Home » Whiplash Claims In Ireland – A Real Pain In The Neck?

Whiplash Claims In Ireland – A Real Pain In The Neck? 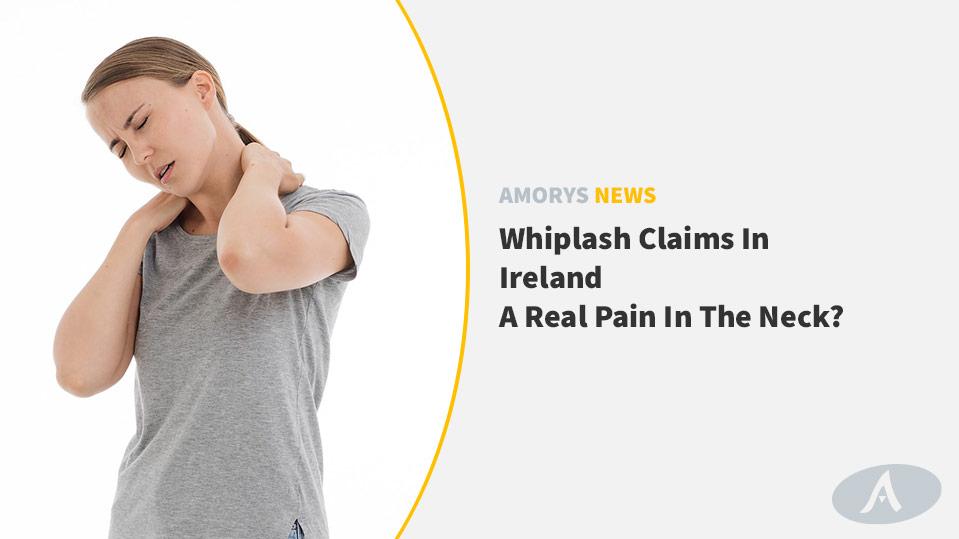 Whiplash claims in Ireland seem to receive more than their fair share of publicity these days. It is often claimed that damages awarded for whiplash injuries in Ireland are disproportionately high compared to other jurisdictions and it has been widely reported in the media that awards for whiplash injuries are four times higher in Ireland than in the UK. Whiplash claims are notoriously difficult to dispute as the injury is “unseen” and there is often scepticism on behalf of insurers as to the true extent and severity of the injury. Insurance companies are quick to point to the cost of false and exaggerated personal injury claims as one of the reasons behind the high cost of insurance premiums in Ireland. However, in an era where Insurance company profits are soaring are payouts for whiplash injuries really such a large part of the problem?

Whiplash is defined in the Personal Injuries Assessment Board (PIAB) Book of Quantum as an over extension or sprain of the neck, often suffered in a motor vehicle accident or high impact slip/trip/fall type of accident. The symptoms of whiplash include pain, stiffness, loss of movement and sometimes headaches, muscle spasms and pain in the arms and shoulders. Recovery can take from a few weeks to many months or years depending on the severity of the injury. The most severe cases of whiplash can cause long term pain and permanent disability.

The PIAB Book of Quantum (updated July 2017) divides whiplash injuries into 5 levels of severity with corresponding guidelines on the potential range of compensation :-

The PIAB Book of Quantum is of course a guideline only and in reality when complex personal injury cases are brought to court, each case is assessed on its own merits and awards of damages are carefully calculated to try to compensate a plaintiff for the injury suffered and any losses and expenses incurred as a result.

The Personal Injuries Commission (PIC) was established in 2017 following a recommendation from the Cost of Motor Insurance Working Group Report published in 2017. The remit of the PIC was to further investigate issues raised in the report such as the prevalence of soft tissue injuries in personal injury claims in Ireland.

It is important to note that the statistics for personal injury payouts in Ireland include whiplash and any other injuries sustained by claimants so it is not possible to look at the damages awarded for whiplash in isolation. This was recognised by the Personal Injuries Commission’s second report in 2018 (PIC2). In the comparison of actual payouts for a whiplash injury with the UK, in Ireland “Where a claimant has multiple injuries, the data includes the payment made for all injuries rather than just the soft-tissue injury element. This may result in average costs of soft-tissue injury being overstated”. As this comprehensive article by Economist Martin Kenneally highlights, the methodology used by the PIC2 in comparing the Irish system with the UK overstates the real cost of payouts for whiplash injuries in Ireland by approximately 100%. As a result, awards for whiplash in Ireland are not 4.4 times greater than awards in the UK but are more likely to be 2.2 times greater. It was also noted in the report that, in general, Irish personal injuries awards compared to personal injury awards in the UK were approximately 1.5 times higher and this was due to the higher severity of injury occurring in Irish road accidents compared with the UK even though there were fewer reported road casualties in Ireland than in the UK.

Irish insurance companies estimate that 20% of personal injury claims made are fraudulent or exaggerated and they claim that this is part of the reason why insurance premiums are so high in Ireland. Insurance companies have dedicated fraud teams that specifically target any claims that they believe have the potential to be fraudulent or exaggerated. They also are obliged to report suspected fraudulent or exaggerated claims to An Garda Siochana for further investigation and criminal prosecution where warranted. With such a high number of suspected fraudulent claims one would expect an equally high level of reporting of suspected claims to the Gardaí. However, during the Oireachtas Finance Committee meeting on the 4th July 2019, where insurance industry representatives were questioned in relation to their 20% fraud/exaggeration estimate, it was noted that only fifty cases of suspected fraud were reported to the Gardaí in the preceding eight months. Furthermore, the reported fraud cases related to all areas of insurance not just personal injury claims. The large discrepancy between what the insurance companies claim to be fraud or exaggeration and what they actually report to the Gardaí is presumably because there is simply not enough evidence to prove the suspected fraud or exaggeration.

Indeed, further efforts to improve road safety and to reduce the severity of road traffic accidents in Ireland, together with more standardised diagnosis and treatment of whiplash injuries, may do a lot more to reduce the level of soft tissue whiplash claims in the first place rather than simply reducing or capping the compensation payouts for these injuries when they are genuinely claimed.

Whilst every effort has been made to ensure the accuracy of the information contained in this article, it has been provided for information purposes only and is not intended to constitute legal advice. Amorys Solicitors is a boutique commercial and private client law firm in Sandyford, Dublin 18, Ireland.
For further information and advice in relation to “WHIPLASH CLAIMS IN IRELAND”, please contact Daragh Burke, partner, Amorys Solicitors daragh@amoryssolicitors.com, telephone 01 213 5940 or your usual contact at Amorys.
← Read previous post Read next post →

The MIBI - Questions & Answers What is the MIBI? This is an acronym for the Motor Insurers Bureau of Ireland. What does it do? The State is obliged by the European Union Motor Insurance Directive 2009/103 to have a...

END_OF_DOCUMENT_TOKEN_TO_BE_REPLACED

Farming Accidents In Ireland There are approximately 137,000 farms in Ireland with an average of 173,000 people employed in the agri-food sector. According to a 2018 Teagasc survey the average size of Irish farms is 43...

END_OF_DOCUMENT_TOKEN_TO_BE_REPLACED

The first Periodic Payment Order (PPO) was approved by an Irish Court in February 2019. The 13-year-old plaintiff suffered brain damage at birth and will receive an annual payment of €610,000 for the remainder of her...