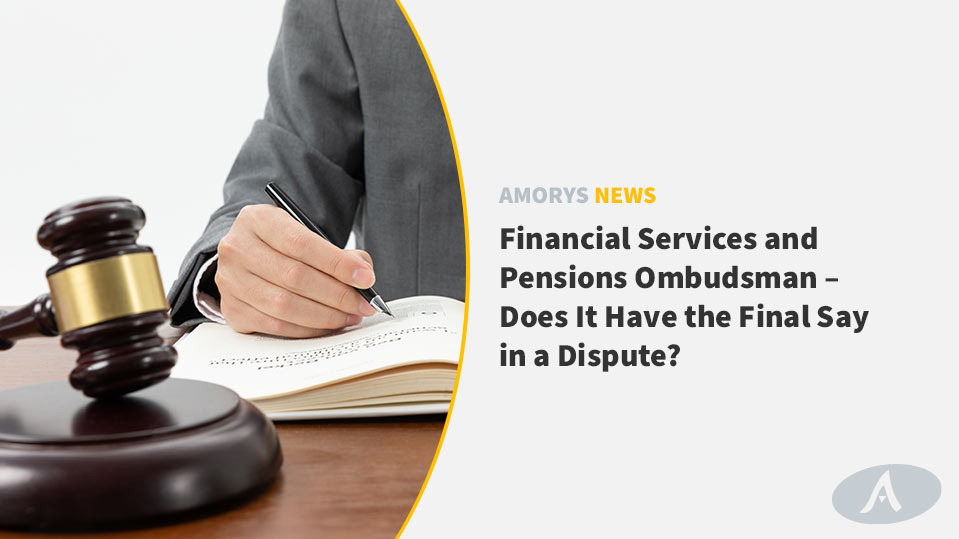 Financial Services and Pensions Ombudsman – Does It Have the Final Say in a Dispute?

The Financial Services and Pensions Ombudsman (“FSPO”) in its current form was established in 2017 with the aim to provide a service that was impartial and accessible to customers and one which delivers fair, transparent and timely outcomes to disputes between customers and financial service and pension providers, thus limiting the number of disputes of this nature before the Courts.

Background to the Case

This case originates from a complaint by the Claimants/Notice Parties, Joanna Donnelly and Harm Luijkx (“the Claimants”), who purchased a home from a developer in 2006 and entered into a contract with Lloyds for insurance cover relating to potential structural defects in the property. Two defects subsequently became apparent; 1) damage to the structure caused by pyrite and 2) damage to the structure of the roof. The Claimants submitted a claim to Lloyds in respect of both issues.

Lloyds accepted the claim in relation to pyrite but rejected the claim for damage to the roof. Lloyds adopted the position that the damage to the roof was not inherently a structural defect, but instead was caused by a leak from a water tank which had not been properly fitted, i.e., a workmanship defect. The Claimants submitted a complaint to the FSPO in 2020 following a 6-year period spent seeking resolution to the matter with Lloyds, who maintained their position throughout.

The FSPO upheld the complaint made by the Claimants on the basis that the rejection of the claim by Lloyds was unreasonable, unjust and improper and directed that compensation of €20,000 be paid to the Claimants.

The Appeal to the High Court

In line with section 64 of the Financial Services and Pensions Ombudsman Act 2017, Lloyds proceeded to challenge the decision of the FSPO before the High Court on the basis that the FSPO erred in their finding which benefitted the Claimants, that the FSPO exceeded their jurisdiction and that the compensation was disproportionate. Judge Siobhán Phelan of the High Court found in favour of the FSPO, providing useful commentary as to the remit and jurisdiction of the FSPO.

Judge Phelan held that in order for a financial services provider to be successful in its challenge to a decision made by the FSPO, the provider must prove that a serious and significant error has been made by the FSPO in arriving at its decision. This standard has been consistently applied since 2006 (see Ulster Bank Investment Funds Ltd v Financial Services Ombudsman [2006] IEHC 323). In Lloyds, this threshold was extended to include a material error of law.

The standard of review that is to be adopted is to be one “not dissimilar” to Judicial Review as outlined in Verschoyle-Greene v Bank of Ireland Private Banking and FSO [2016] IEHC 236. The Court will not re-examine matters from the beginning or adopt the role of the FSPO. Instead, a decision made by the FSPO will not be deemed to be a serious and significant error if sufficient evidence put before the FSPO could reasonably lead to the decision made by it. In Lloyds, conflicting reports as to the cause of the damage to the roof was submitted by numerous engineers, therefore it was considered reasonable for the FSPO to arrive at its conclusion on foot of the evidence provided.

On that basis, the Court will not intervene to set aside decisions where it disagrees with the determination of the FSPO so long as no serious and significant error has been made in reaching this decision.

Lloyds is an instructive case in setting out the jurisdiction of the FSPO. The purpose of the FSPO is to afford an “informal, expeditious and inexpensive” way to resolve complaints made against financial services and pension providers, without the parties having to resort to the Courts in pursuit of a resolution.

It is set out in Molyneaux v Financial Services and Pensions Ombudsman [2021] IEHC 668, the FSPO enjoys a “hybrid jurisdiction” which extends to both the adjudication of alleged acts of maladministration and to make determinations in respect of disputes of fact or law. The FSPO has jurisdiction over cases centred around the assertion of legal rights, but cannot make determinations in cases where a financial services provider has acted unlawfully.

In the Lloyds judgment, Judge Phelan outlined that the FSPO enjoys a wide discretion regarding compensation up to a higher limit of €250,000. The €20,000 compensation payable to the Claimants in Lloyds was held to be reasonable on the basis that the delays in repairing the roof issue interfered with the Claimants occupation and enjoyment of the home and therefore the personal rights of them as homeowners. It was noted that the FSPO cannot and should not compensate for ‘stress’ but instead can justify making an award based on inconvenience.

END_OF_DOCUMENT_TOKEN_TO_BE_REPLACED

Female army Captain, who served in the army for 9 years was awarded record damages for discrimination when all of her Captain colleagues (who were male) were promoted to Commandant after 9 years in accordance with the...

END_OF_DOCUMENT_TOKEN_TO_BE_REPLACED

On 1st June 2017 the Supreme Court delivered a long-awaited judgment in David Walsh v Jones Lang LaSalle, 2017 overturning a previous decision of the High Court to hold an auctioneering firm liable in damages to a...