Home » Survival of Actions on Death….

Survival of Actions on Death…. 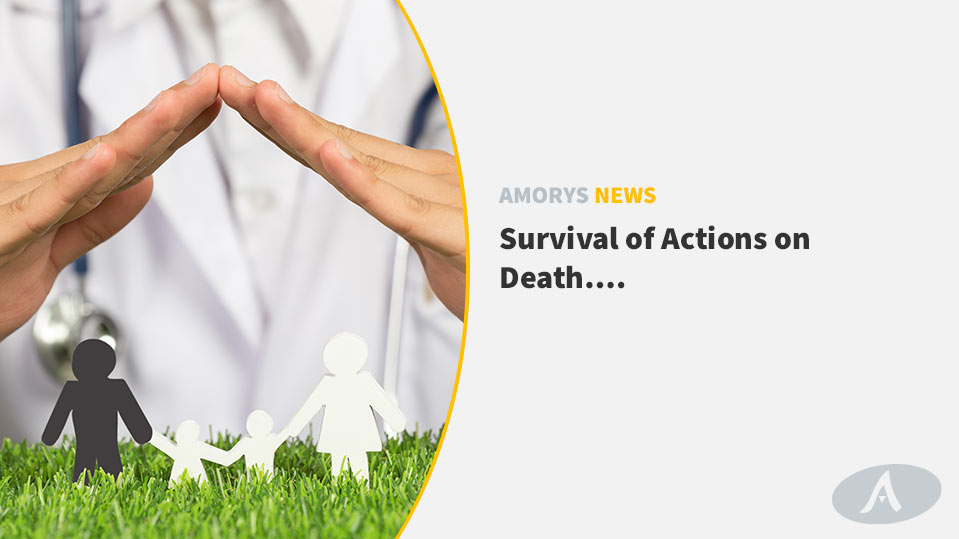 Survival of Actions on Death….

Do legal actions and claims survive the death of a Plaintiff or prospective Plaintiff? Can such claims/actions be maintained or initiated subsequent to the death of the intended Defendant?

Prior to 1961 when an individual died (“the Deceased”) any cause of action in civil cases ended upon his/her death. The Civil Liability Act 1961 reformed this area and since then certain causes of action survive for the benefit of the Deceased’s estate i.e., assets owned by the Deceased as at the date of death (“the Estate”). In practical terms this resulted in the Deceased’s personal representative being able to sue and be sued, with some limits applied. Such limited or excluded causes of action (referred to in the legislation and case law as “excepted causes of action”) which do not survive death include breaches of promise to marry, seduction, inducing one’s spouse to stay or leave or criminal conversation. Defamation was also excluded until the introduction of the Defamation Act 2009.

Claims on Behalf of the Estate

Where a personal representative of an Estate takes an action against a third party, the damages which are recoverable for the benefit of the Estate are limited. For example, the personal representative can take an action seeking damages on foot of a defamatory statement made by an individual against the Deceased and can recover damages where financial loss was suffered by the Deceased as a consequence of the defamatory statement. However, certain damages will not be awarded by the courts and therefore the Estate will not be successful in a claim for damages which fall into the following categories;

These exclusions are listed in Section 7 of the Civil Liabilities Act 1961 and are describes as “excepted causes of action”.

The 2016 case of Doyle (As Per. Rep. Of the Estate of Bridget Doyle, Deceased) v Dunne [2016] IESC 68 is a recent example of the limitation of damages being upheld by the Supreme Court and provides useful commentary from as to the rationale for these exclusions.

The Plaintiff, Mr. Doyle, cared for his mother who was in ill health since suffering a brain haemorrhage in 1996 up until the time of her passing in July 2014. In 2010, Mrs. Doyle underwent a surgical procedure to remove cataracts and suffered complications in surgery. Arising out of these complications, Mrs. Doyle brought legal proceedings seeking damages for personal injury on the basis that those in charge of her treatment acted negligently.

For technical legal reasons, Mrs. Doyle’s case was ultimately dismissed. Due to Mrs. Doyle’s ill health she was unable to appeal the dismissal herself. As her son and next-of-kin, Mr. Doyle, acting on behalf of his mother, appealed the dismissal his mother’s action to the Supreme Court. Unfortunately, Mrs. Doyle died before the conclusion of this hearing and the Estate was not awarded any compensation on her behalf.

The Supreme Court upheld the arguments of the Defendant that the relevant provisions under the Civil Liability Act were designed to uphold the compensatory nature of personal injuries and not to afford a windfall to the Estate. The Supreme Court emphasised that as the Deceased was dead, damages for the personal injury of the Deceased could not be awarded to the Estate in line with the Civil Liability Act. It was held that damages for pain and suffering could only be claimed by the individual who experienced the injury for which compensation was sought and the Estate could not claim for the suffering of another person i.e. the Deceased.

This case confirms that the provisions of Section 7 of the Civil Liability Act continue to apply.

Claims Against the Estate

The personal representative of an Estate can also be sued by someone who decides to take an action against the Estate, but not an action based on the “excepted causes of action” listed above. Any loss or damage suffered by the Deceased under these headings will be deemed by the court have occurred before the death of the deceased and therefore not eligible for an award in favour of the Estate.

In order to make a claim against an estate, legal proceedings must be issued within a specific time limit. Proceedings must be commenced within the relevant period under the Statute of Limitations 1957 i.e., i) prior to the death of the Deceased or ii) within a period of two years after the death occurs. Failure to adhere to these time limits will result in the prospective plaintiff’s inability to take action against an Estate.

A claim can be taken on behalf of the Estate in circumstances where the death was caused by a tortious action, on foot of which the Deceased could have sued had they not died. This is known as “wrongful death” and is actionable under Part IV of the Civil Liability Act 1961. Only one action in respect of wrongful death can be taken and is for the benefit of all or any close family members, known as dependants, as its purpose is to compensate the family. Dependants include the spouse, children (including step children), parents, grandparents, grandchildren, and siblings (including half-siblings).

This action should be taken by the personal representative. If after six months of the Deceased’s death no Grant of Probate or Letters of Administration have issued and there are therefore no personal representatives legally entitled to issue such proceedings, any dependant can take the action. The action must however be commenced within three years following the Deceased’s death.

There are three types of damages which may be awarded under a wrongful death action;

The court will not take into consideration and will ignore the proceeds of insurance policies or pensions payable upon death when calculating the amount of damages under a wrongful death action.

Extracting a Grant of Probate in Ireland from Abroad

If you have been appointed executor in a Will of a deceased person who had property in Ireland and you live abroad below are some things you will need to do before extracting a Grant of Probate in Ireland, if required....